Seeking Volunteers: How (and WHY) Flights are Oversold

If you’ve ever flown for the holidays, during spring break, or on a peak summer travel day, you’re all too familiar with the gate agent making the announcement that the flight is oversold and they’re seeking volunteers. Most of the time, someone catches a later flight and gets a lovely incentive from the airline to do so. It’s not uncommon to hear various passenger perspectives on why or how this could happen, but it’s never a mistake. Many airlines oversell hundreds of flights as a revenue maximization tactic.  It’s smart business!

Here’s why. People miss flights. Most flights that are booked full never actually leave the gate full. Passengers miss flights for thousands of life-related reasons and airlines track this. Each flight is different, but airlines always mathematically estimate how many people won’t show up for a flight based on historic data and other situational information. They take advantage of this data in an effort to maximize revenues, because once a flight departs, empty seats mean lost revenue that can never be regained.

A simplified example may help explain.  If one flight has had two people not show up every day for a year, that flight may be marketed to sell 2 more seats than the aircraft holds. Depending on the route and aircraft type, airlines may choose to oversell by as little as one or in excess of a dozen. Again, this happens because if they only sell to capacity, and the people that don’t show up end up getting refunded, that’s lost revenue. Of course, there are many situations where airlines won’t oversell a flight at all because the odds of everyone showing up are very high.

There are other reasons that your flight could end up oversold. There can always be a last minute swap to a smaller airplane for operational reasons. If there’s a cancelation or an irregular situation, airlines could overbook flights that they might not normally overbook in an effort to get everyone where they need to go. It is also possible that the weather may impact whether or not a flight can be oversold.

The good news is that it is very rare for a passenger to be unwillingly removed from a flight because it was oversold. Most of the time it’s a win-win situation:  when flights are missed, the airlines are able to ensure full flights, and nearly all the time, airlines will find passengers who will happily volunteer for a later flight in exchange for incentives such as some cash or flight vouchers. So listen up the next time you’re in the gate area.  When you hear, “Seeking volunteers,” will you raise your hand?  It could be worth it!

Changes to handicapped parking being made at AVL 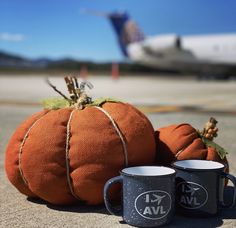 Coffee + Conversation — WE WANT TO HEAR FROM YOU! Pumpkin spice and everything nice, the fall season is upon us and there is a chill in the air. Where you are dreaming of traveling?