We call ourselves “AVL” - Speaking in aviation code

AVL. We use it all the time. Fly AVL. FlyAVL.com. Facebook.com/FlyAVL. @FlyAVLnow on Twitter. You probably know that AVL has something to do with the airport, and you see it on your bag tag, but what does AVL really mean? What’s an “AVL”?

AVL is our airport’s identification code. All airports are known in aviation, largely, by their code. Airports are assigned codes by the International Air Transport Association (IATA) and the International Civil Aviation Organization (ICAO). In the United States, the Federal Aviation Administration also assigns or acknowledges a code as an airport’s location identifier. These codes are used for many purposes, from flight planning to record keeping.

IATA codes are three characters in length and ICAO codes are four characters, with the first being a country or region identifier. Most U.S. airport codes begin with the letter K, Canadian airports the letter C, Europe the letter E and so on. In Asheville’s case, our codes are AVL and KAVL, respectively. The picture below shows every region around the world and its corresponding prefix under ICAO standards. 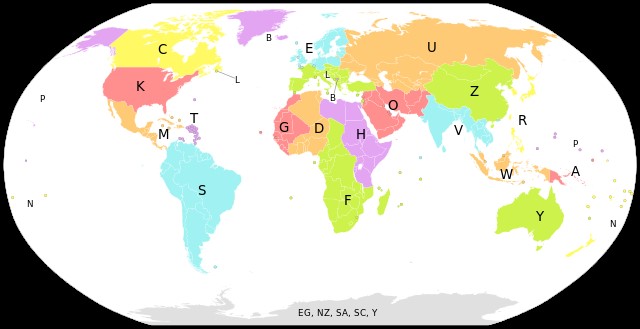 Generally, airlines use the IATA codes to identify airports when presenting them in public places; like their websites and reservation systems. The ICAO codes are used for navigation and flight planning purposes. This probably has to do with the fact that most IATA codes are common-sense oriented, whereas ICAO codes are less straight forward, especially in other countries.

Internationally, it’s normal for an airport’s IATA and ICAO codes to be completely different from one other. London Heathrow is known to IATA as LHR (which most frequent travers are familiar with) and to ICAO as EGLL. Charles De Gaulle airport in Paris is known as CDG to IATA and LFPG to ICAO. If you happened to fly to Charles De Gaulle, your ticket and baggage tag would say CDG, but the flight plan would be filed with “LFPG” as the destination. The IATA codes are often very easy to associate with the name of the airport. Many frequent travelers can quickly make sense of codes like LHR, CDG, FRA, AMS, and so on. Their ICAO counterparts of EGLL, LFPG, EDDF, EHAM… not so much.

In the U.S., most airports’ IATA and ICAO codes are the same, with the exception that the ICAO code adds the “K” at the beginning. There are rare exceptions, though, such as the Branson airport, which is known by IATA as BKG and ICAO as KBBG. There are a fair number of exceptions, each with its own interesting story that often ties a seemingly bizarre code back to its original meaning.

Chicago O’Hare bears the code ORD, as the site of the airport used to be known as Orchard Field. New Orleans is known as MSY, for the Moisant Stock Yards that used to occupy that airport’s location. Some western airports such as Los Angeles, Phoenix, and Portland simply added an “X” to their existing weather station codes, leaving us with LAX, PHX and PDX respectively. Cincinnati uses CVG, as the airport sits in Covington, Kentucky and Louisville is known as SDF, derived from the airport’s original name, “Standiford Field.”

The next time you pick up your luggage from baggage claim, take a look at the codes on the tag. Odds are, you’ll recognize what you see, but you just might discover a new one. There are also a handful of websites (like this one) that tell some of the interesting stories about the origins of specific airport codes.

While we’re on the subject, here’s a useful tip every traveler should know: When you’re booking travel online, you can generally enter the airport code in the “departure city” and “arrival city” fields to speed your search process — if you know the codes! We might be biased, but we think the most important one you need to know is AVL!

We are proud to be an integral part of the fabric of WNC. Thanks Asheville Citizen Times for the great article. https://www.citizen-times.com/story/news/2021/10/29/nc-asheville-regional-airport-avl…