What is that Unidentified Flying Object coming in for a landing at AVL? 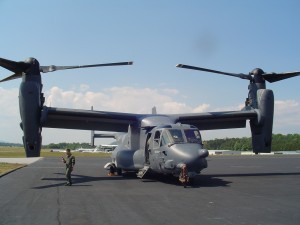 At Asheville Regional Airport, we sometimes receive phone calls or emails that sound something like this:  “I saw a large, unmarked white … plane, I think … flying really low around the airport.  It made a loud rumbling sound, and it seems to be circling.  What is it, and why is it here?”

Or this:  “Was that a helicopter or an airplane I saw land at the airport today?  It didn’t look like any airplane I’ve ever seen – it had wings, but it also had propellers like a helicopter.”

Or even this:  “Can you tell me what the low-flying, small aircraft flying in formation were, and why they were here?”

If you look to the skies, on a pretty regular basis around the airport you will see many different kinds of military aircraft.  And this doesn’t make sense to many people – we don’t have any military bases in western North Carolina!

But think about this:  our military service men and women who fly military aircraft must continually train, build their hours in the air, and fly in different types of airspace and environments.  Asheville Regional Airport is a high altitude airport in the eastern U.S., located within mountainous terrain.  We are great training ground for the military.

There are several military bases located within an easy hour or two flight from AVL – from Florida to the coast of North Carolina.  We’ve even seen military aircraft here all the way from California!

So, yes, you are sometimes seeing unusual aircraft in the skies (at least unusual for our area).  However, when you call and ask us what aircraft are flying on a particular day, or where they are from – we may not be able to answer your question.  Flight plans do not have to be filed with us ahead of time, and often, when military aircraft arrive in town, we are as delighted and surprised as you are!    (Note:  The Federal Aviation Administration Control Tower is in contact with all pilots as they maneuver controlled airspace, and request to take off or land at AVL; however, the team of airport workers "on the ground" and in the terminal are not.  It is not uncommon to see employees at AVL with their noses pressed to glass, checking out the cool aircraft that have just arrived.)

Most often, the military aircraft are practicing take-offs and landings, so they land and then immediately take off again multiple times in a row.  These are called “touch and go’s” and are common training exercises.

The photo above is of a frequent visitor to our area - a Boeing V-22 Osprey, operated by the U.S. Marines and the U.S. Air Force.  We enjoy seeing these “UFO’s” when they come, and hope you do, too.

American Airlines explains how the HEPA filters on their aircraft remove 99.97% of airborne particles from the air during your flight — part of their Clean Commitment. #flyAVL #AVLTravelSmart https:…

#AVLTravelSmart is our commitment to follow best practices to protect the travelers of WNC. Together, we can enhanc… https://twitter.com/i/web/status/1291780152234565636